Built in 1894, The Saranac Laboratory was the first lab built in the U.S. for the research of tuberculosis. Historic Saranac Lake painstakingly restored the building and opened it as a museum in 2009. The museum is open with permanent exhibits on scientific research and patient care and temporary exhibits on topics of local history. The museum is open year-round Tuesday - Saturday, 10:00 - 5:00. Click here to plan your visit. 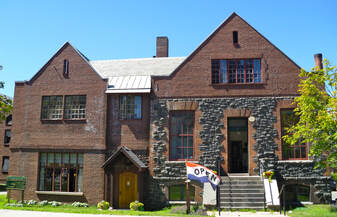 HISTORY OF THE SARANAC LABORATORY 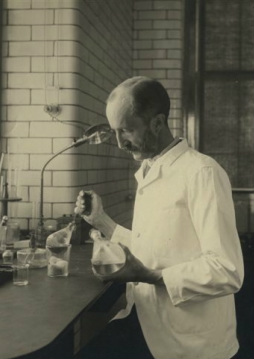 Dr. Edward Livingston Trudeau came to the Adirondacks in 1873, seriously ill with tuberculosis. Here his health improved in the mountain climate. After seven years and repeated attempts to return to New York City, all with bad effects on his health, Trudeau built a winter home in Saranac Lake, and founded the Adirondack Cottage Sanitarium to care for incipient cases of tuberculosis among the working poor.

On March 24, 1882, in Germany, Dr. Robert Koch read his paper, “The Etiology of Tuberculosis,” with its startling conclusion that the disease was caused by an identifiable organism, the tubercle bacillus. Trudeau read abstracts of the paper in medical journals, and it excited his imagination. C.M. Lea gave the doctor a Christmas present of “a very full translation,” hand-written in a copy book. Wrote Trudeau, “I read every word of it over and over again.”

Convinced by Koch’s logic and enchanted by the possibility of a cure, Trudeau determined to learn how to stain and recognize the tubercle bacillus under a microscope in order to try Koch’s experiments for himself. Trudeau spent several days in Dr. T. Mitchell Prudden’s makeshift laboratory in New York, struggling through the difficult process until he became proficient enough to work alone.

“In the fall of 1885, as soon as I had equipped my little laboratory-room, “ wrote Trudeau, “I began to work.” At first he used his eight-by-twelve foot home office. Since the house was lighted by kerosene and heated with wood, “on very cold nights the doctor often had to get up and replenish the fuel, “ noted historian Alfred Donaldson. “These quarters were so cramped … ” Trudeau said, “that I soon built a little addition off my office, and this became the laboratory in which I worked until … 1893.”

A Fire and the Phoenix Trick 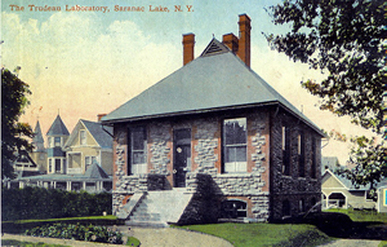 The extraordinary cold mountain environment in which Dr. E.L. Trudeau was working demanded that he improvise special equipment to maintain the constant high temperature needed for germs to grow. The heat also had to be kept up for a long time compared to “any of the disease-producing organisms discovered before it.” After many attempts, Trudeau became “the second experimenter in the country” to grow a pure culture of the tubercle bacillus. “With these cultures I repeated all of Koch’s inoculation experiments, “ and then “began making original ones.”

In December of 1892, young Dr. E. R. Baldwin from New Haven [Connecticut] applied for entry to the sanitarium. Trudeau wrote “When asked what made him think he had tuberculosis, he quite floored me by his answer: that he had used his microscope and knew he had it … At my invitation he came to the Laboratory the day after he arrived in town and offered to help me there in any way.”

“For years Baldwin would carry his bundle of the literature over to the doctor’s house in the evening,” Dr. Allen K. Krause remembered, “and there read to him what was going on in tuberculosis, particularly in Germany,” and Trudeau would tell him what was happening in France. “This pair formed an almost ideal combination for scientific work.”

Late in 1893, an imported laboratory heater set fire to the Trudeau family’s house while they were away and burned it to the ground. “There is nothing like fire to make a man do the Phoenix trick,” consoled Dr. William Osler.

The day after the fire, George C. Cooper visited Trudeau, his doctor and his friend, to offer him “a good stone and steel laboratory, one that will never burn up. Plan it just as you want it, complete, and I will be glad to pay for it and give it to you personally.” The name “Saranac Laboratory” was a compromise between Cooper and Trudeau, who each wanted to name it after the other. 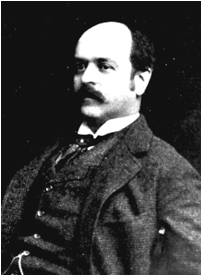 Architect J. Lawrence Aspinwall.
was designed for Dr. Trudeau by his cousin, J. Lawrence Aspinwall, junior partner of James Renwick in the New York City firm of Renwick, Aspinwall & Renwick. Branch and Callanan Lumber Company of Saranac Lake built the laboratory between May and November of 1894, at a cost of $20,000, fully equipped. Dr. Trudeau provided land, “part of my house lot on Church Street … convenient for Dr. Baldwin and for me."

The Saranac Laboratory was the first laboratory in the United States built exclusively for reseach on tuberculosis. Trudeau and Aspinwall planned this laboratory with particular attention to fire protection, light, ventilation and disinfection.

“We had no opening ceremonies and never have had any, “ wrote Trudeau. “When everything was ready, Baldwin and I merely began to move the apparatus we already had in use from the little shed near the barn to our beautiful new quarters, and to continue the work we were doing.”

To replace the Queen Anne-style house that had burned, Aspinwall also planned a new Colonial Revival home and office, in use to the present day as the offices of Medical Associates, successor to Dr. Trudeau’s practice.

From the very beginning of his laboratory studies Trudeau had used animal subjects, perhaps more readily than his urban counterparts because he was a hunter and they were more easily available in the country. Facilities for animals were a part of the original design of the laboratory. Declared Trudeau, “A hundred or more of these animals (rabbits, fowl, and guinea pigs) are kept in cages in the basement. They have good care and never suffer either from the disease or in the manner of their death.” In 1910, Trudeau wrote in the Journal of the American Medical Association: “Thanks to animal experimentation, we know today that tuberculosis is not inherited; that it is communicable and, therefore, preventable; and that in its earlier stages it is curable.”

In 1926 an addition was made at the rear of the building to provide more space for raising experimental animals. It was torn down around 1970, but the concrete floor can still be seen. The left wing addition—the John Black Room and upstairs offices—was completed in 1934.The Saranac Laboratory closed in 1964, with the on-going experiments transferred to the new Trudeau Institute, where Dr. E.L. Trudeau’s influence in science continues today.

The laboratory building was donated to Paul Smith’s College in 1966; it served as classroom and dormitory space until the college’s new building opened next door in 1987.  Historic Saranac Lake became the owner of the former Saranac Laboratory in 1998, painstakingly restored the building, and opened it as a museum in 2009.