​The Barók Fund supports the maintenance of the Bartók cabin, the preservation and eventual display of the Béla Bartók Collection, and ongoing programs to raise awareness of Bartók's music and history in Saranac Lake. The fund was started thanks to generous support from family and friends of Jody Sandhaus and donations from summer Bartók concerts. Our goal is to build the Bartók Fund to $50,000. Donors to the Bartók Fund will be recognized on a plaque located with the Bartók exhibit in the new museum.
Support the Bartók Fund

​Visitors can tour the small cabin where Hungarian composer Béla Bartók spent the last summer of his life. These tours are available when the museum is open, by appointment only, and dependent on staff or volunteer availability, so advance notice of at least 48 hours is required. This is a partially outdoor tour and takes place rain or shine, but please note the cabin may be inaccessible in winter months due to snow. The tour is $10/person, and includes same-day admission to the Saranac Laboratory Museum. The Bartók Cabin is on private property, so access is only available through Historic Saranac Lake. Please call (518-891-4606) or email to set up an appointment.

​​ABOUT THE BARTÓK CABIN 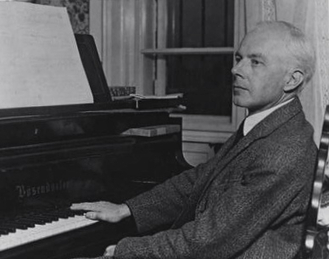 In 1945 the great Hungarian composer Béla Bartók spent the last summer of his life in Saranac Lake, writing two pieces, his Third Piano Concerto and Viola Concerto. Some 70 years later, Bartók's reputation has soared, and the cabin on Riverside Drive where he stayed has been saved from near collapse.

Ill with polycythemia, a form of leukemia, Bartók was sent by his doctors to Saranac Lake for the summer of 1943. That summer the Bartóks stayed with Mrs. Margaret Sageman, who owned a large cure cottage at 32 Park Avenue and lived in a smaller bungalow behind it. In less than two months there, Bartók composed his Concerto for Orchestra. He returned to the Sageman Cottage in 1944.

In the summer of 1945, the Bartóks moved into a four-room cabin on Riverside Drive. Mrs. M. A. Levy, with whom the couple had become friends in previous summers, had helped them find it, next door to her house. The cabin stood in the back yard of a house rented by Maks Haar, who worked for Lederle drug company, and his wife, the former Ida Weinstock, who had been raised in Saranac Lake. For fifteen dollars a month, Maks and Ida sublet the cabin to the Bartóks, who inscribed the Haars' guest book: "We are happy indeed to stay in this wonderful quiet place."

It is not known when the rustic cabin was built, though it seems likely to have been a summer curing facility for tuberculosis patients when the house was a cure cottage called Balsam Manor. No historic photos of the house show the cabin, though it may have been present when they were taken. Maryland Avenue behind the cabin was still undeveloped in 1945, and Ida Haar remembered going for walks with Bartók in the woods there.

Bartók described the cabin as "a small makeshift place" and "a hovel or hut." It was very simply furnished "with two cots, a small table, chairs that are gone long ago," and no piano, according to their son, Peter. The composer brought with him "a minimum of necessities, two kinds of manuscript paper (one for pencil, one for India ink) and writing instruments."

Bartók wrote about the cabin in a letter to Peter on July 7, calling it "very quiet, but very simple—the bath water must be heated in a stove—the ice-box must be fed real, natural ice." These comments were high praise from Bartók, who greatly valued quiet, simplicity and closeness to nature. Peter observed that "my father was obviously contented; his surroundings were as spartan as the interior of a Hungarian peasant cottage—reminder of a world with such fond associations for him." Here, wrote Peter, "he found the peaceand tranquillity suitable for composing."