MODELS OF LOST BUILDINGS OF SARANAC LAKE
​​by John Wheeler 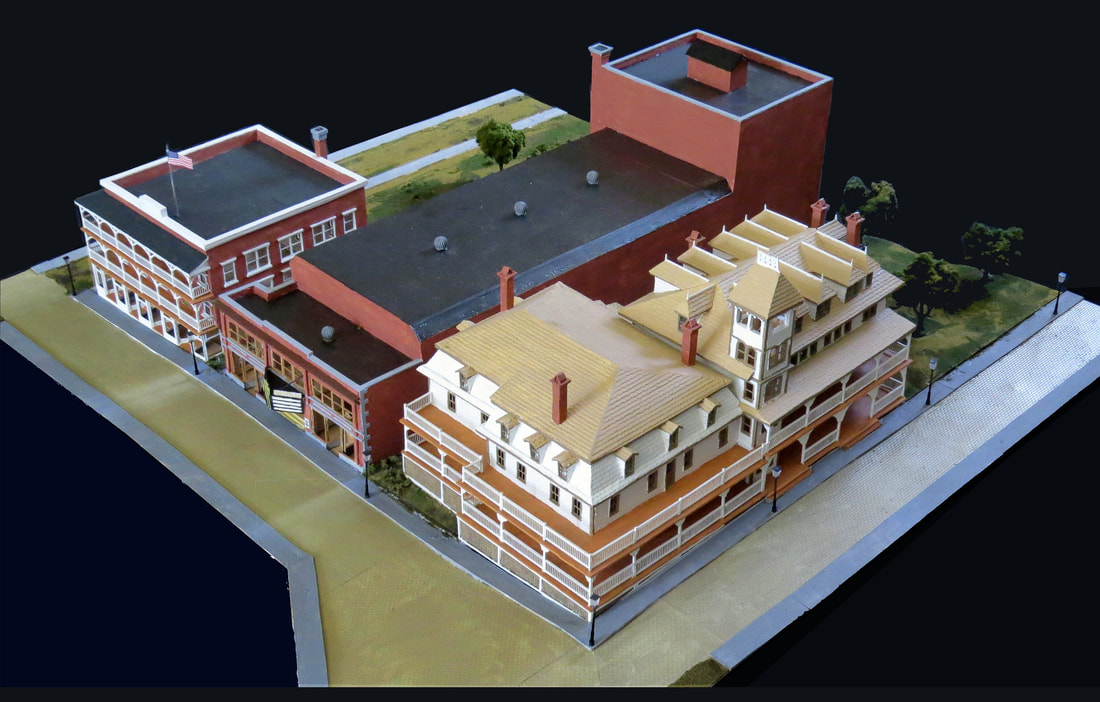 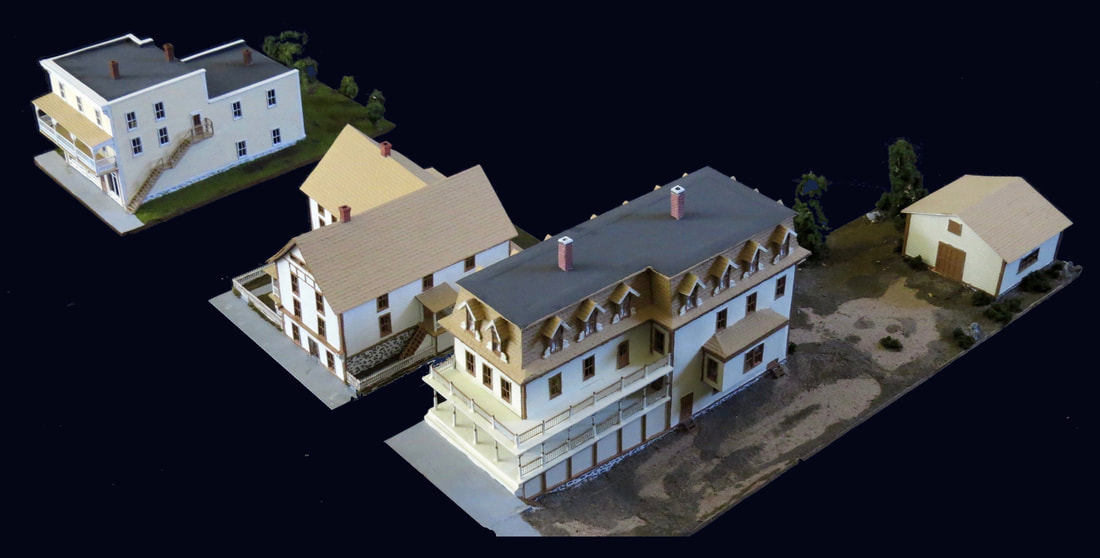 RIVERSIDE INN
Location: Riverside Park
Built: 1860
Torn down: 1930s
​Originally named Blood's Hotel, when it opened on July 4th, Orlando Blood threw a ball for the occasion. The Riverside was known as “the gem of old Main Street, with 61 bedrooms, exclusive of those occupied by family and servants.” Mark Twain occasionally sat on the shaded veranda during his visit to the village at the turn of the century. The dining room could seat 130.

OLD TOWN HALL
Location: 30 Main Street, site of the current town hall
Built: 1886
Lost to fire: 1926
​The building provided classroom space for the high school, and hosted dances and troop mobilizations during WWI. It provided an auditorium for a local theater company and meeting space St. Bernard’s Church and the Odd Fellows Hall. The building stored the records of the Adirondack Daily Enterprise. It burned to the ground in a spectacular fire in July, 1926. Three prisoners in the village "lock-up" were badly burned.

SAINT BERNARD’S CHURCH
Location: 21 St. Bernard Street
Built: 1894
Lost to fire: c.1908
The first St. Bernard's Roman Catholic Church was a beautiful wood-framed structure which opened in 1892. One source says that it burned in 1908, while another claims that the date was St. Patrick's Day in 1909. A second St. Bernard's Church was built in 1911. An impressive stone structure, it seated 800 people. The steeple was 91 feet high. It burned in 1967.​

DR. TRUDEAU'S FIRST HOUSE
Location: 5 Church St. / 105 Main St.
Built: 1884
Lost to fire: 1894
​Dr. E. L. Trudeau built this home in the village and set up shop as the first physician in town. Soon he added a small laboratory to the house in order to conduct experiments on the tuberculosis bacillus. In 1893 the house and laboratory burned to the ground. A second home was built in its place, and three generations of Trudeau doctors practiced there. 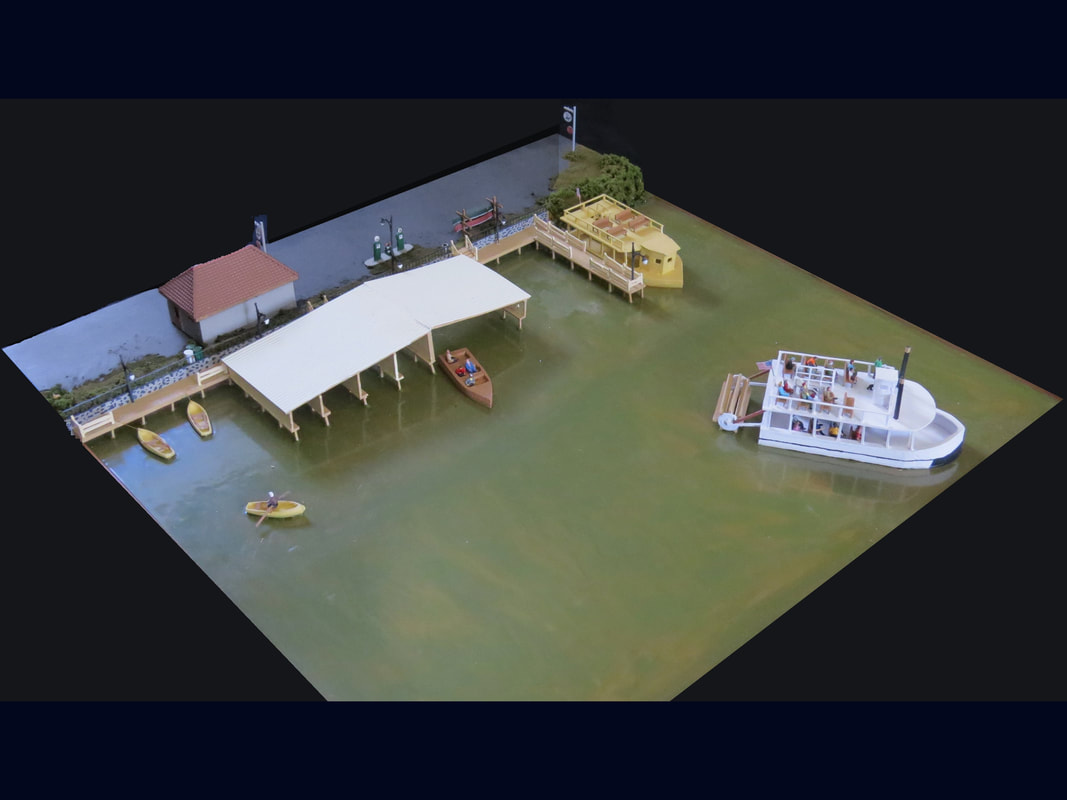 THOMAS BOAT LANDING
Location: 35 River Street, on the north shore of Lake Flower
The Thomas Boat Landing was a boat rental and cruise boat business. Two boats, the Adirondack and the Pollyanna, ran the Lower Saranac route. Both double-decker boats could carry 150-175 passengers. Among the famous passengers who rode on the Thomas boats was entertainer Al Jolson.

RAY BROOK STATION
Year built: 1907, rebuilt 1930
The Ray Brook Station on the Saranac Lake and Lake Placid Railroad served Delaware and Hudson trains from August 1, 1893 until November 1, 1946, and New York Central passenger trains from 1893 until April 25, 1965. A special siding was added in 1932 to handle extra trains for the 1932 Winter Olympics. In 1913 the Ray Brook Post Office moved to the New York Central train station. On December 9, 1928, the Post Office and Queen Anne train station burned to the ground, destroying a large number of Christmas parcels, as well as all the letter mail in the P.O. boxes and General Delivery desk in the Post Office. The new "stone" (or concrete block) Delaware and Hudson Passenger Station at Ray Brook was built in 1930 by J. J. Fitzpatrick and Sons of Plattsburgh, and the P.O. returned there. After a long decline, the New York Central passenger service on its Adirondack Division ended April 24, 1965, the last branch line service on the New York Central System. Until the very end, the line was operated in the fine old tradition of railroading, using Morse telegraphy, train orders and manual block station. The P.O. remained in the train station until 1975, when the building was quite run down. That year the P.O. was moved back to a trailer on the former Ray Brook hospital grounds, by that time converted to Camp Adirondack Minimum Security Correctional Facility.

SARANAC INN STATION
Saranac Inn Station was the site of the railroad station serving Saranac Inn. It was located at the end of Station Road, a fifty-yard long spur off of Fish Hatchery Road, which itself is a loop off of New York Route 30 that starts opposite the western end of Forest Home Road. Fish Hatchery Road follows the former roadway of Route 30; the Adirondack Fish Hatchery is still in operation. It was also the site of the Saranac Inn Nursery and the Experiment Station Nursery. The station was built in 1892, replacing the Derrick station, built in 1890 nine miles to the west. It originally served the New York and Ottawa Railway. It closed in 1956 or '57.